If there is one picture, that could undoubtedly represent the exotic North Kerala, then that should be of “Theyyam“.

Where meager mortals transforms to immortals and  bless the devotees with the divine dance.

Let me share this image for this Week’s Photo Challenge 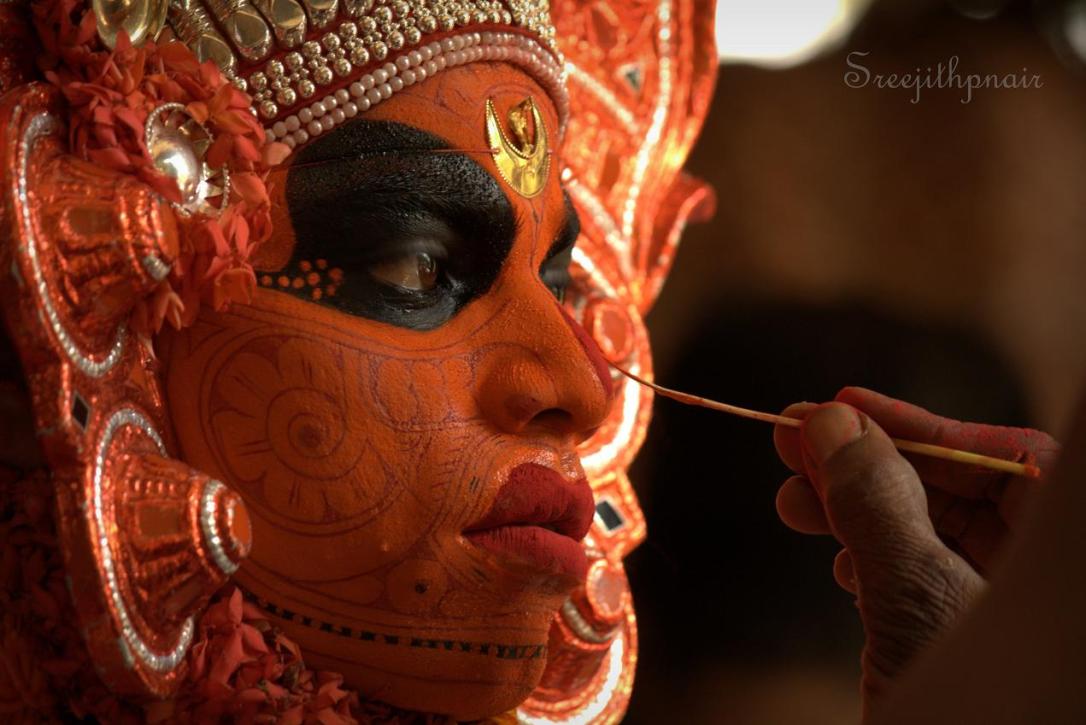 You can have a look at my post Theyyam: The Divine dance from God’s own country for more images.

Neither the temple tower is so huge and intimidating nor the temple complex. Did I waste my precious weekend, deciding to visit this rather small temple, some 4 hours drive from Bangalore?

That was my first impression, frankly.

As I got closer, I did come to know, it’s different, and it’s nothing like whatever I had seen before. 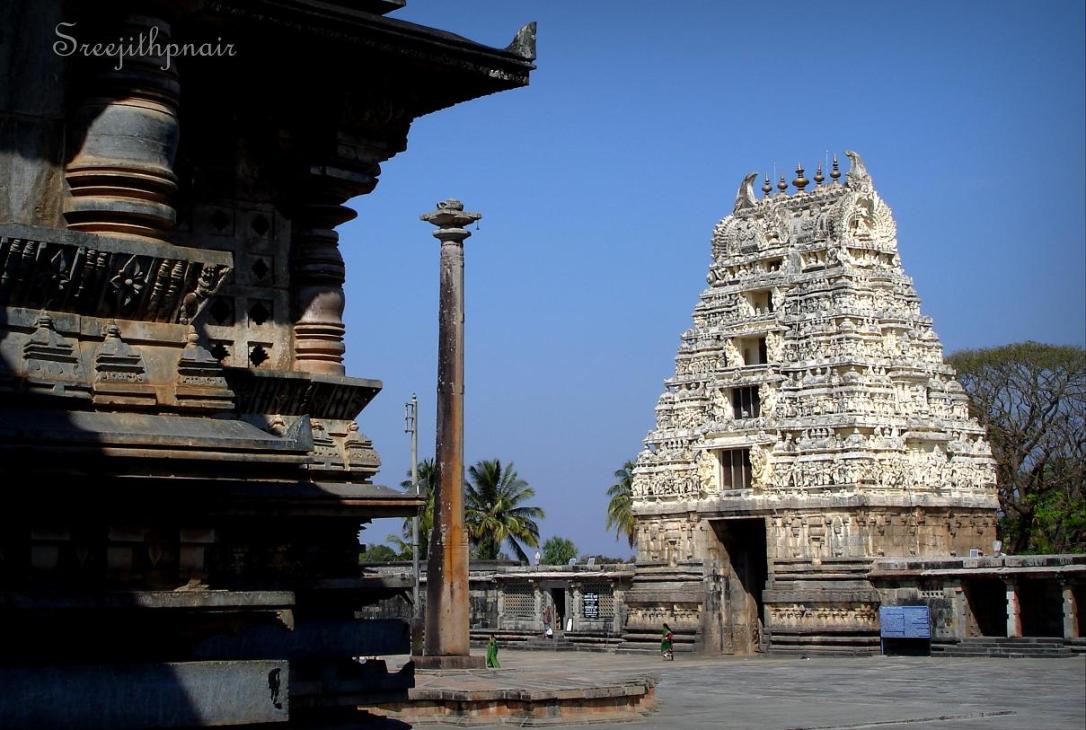 Hardly you could find an inch of space without some kind of stone carving in the whole structure.

Then slowly the great epics of Ramayana and Mahabharata unraveled in front of me.

The Chennakesava temple of Belur was was built by the Hoysala king Vishnuvardhana in 12th Century AD. Belur was an early  capital of the Hoysala empire, which is now in the Hassan district of the South Indian state of Karnataka.

What really makes the Hoysala temples different from the other grand temples of south India is the intricate and detailed stone carved sculptures. For this, the grand sculptors of Hoysala temples used soapstone (chloritic schist). when quarried, soapstone is relatively soft and easy to carve and it becomes harder as time passes. Perfect to endure for hundreds of years and wave after wave of attacks from north Indian kingdoms.

The story behind the name of the dynasty, the Hoysala, is portrayed  in a beautiful sculpture where the King faces an attacking lion alone and kills it.

I really didn’t have an idea, what to shoot and what to leave behind. As I kept on clicking and time passed, my friend reminded me that we have to reach Halebidu before it’s too late. 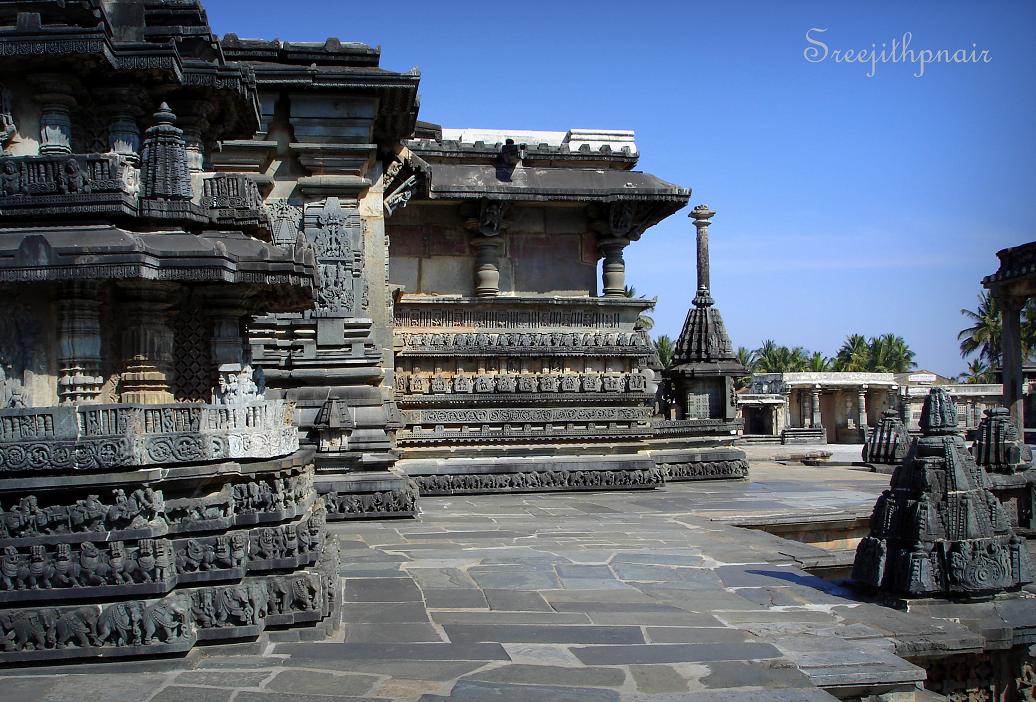 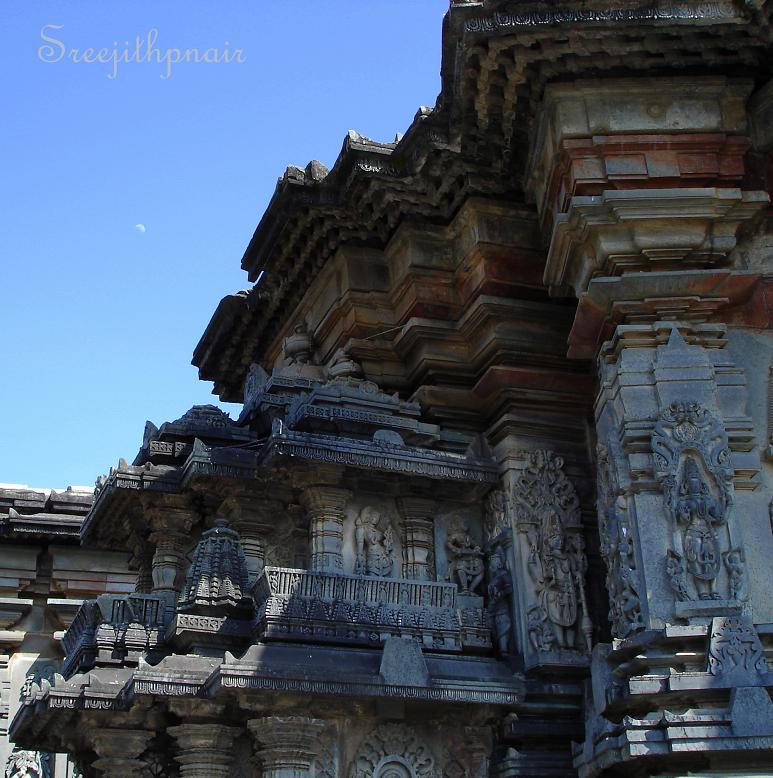 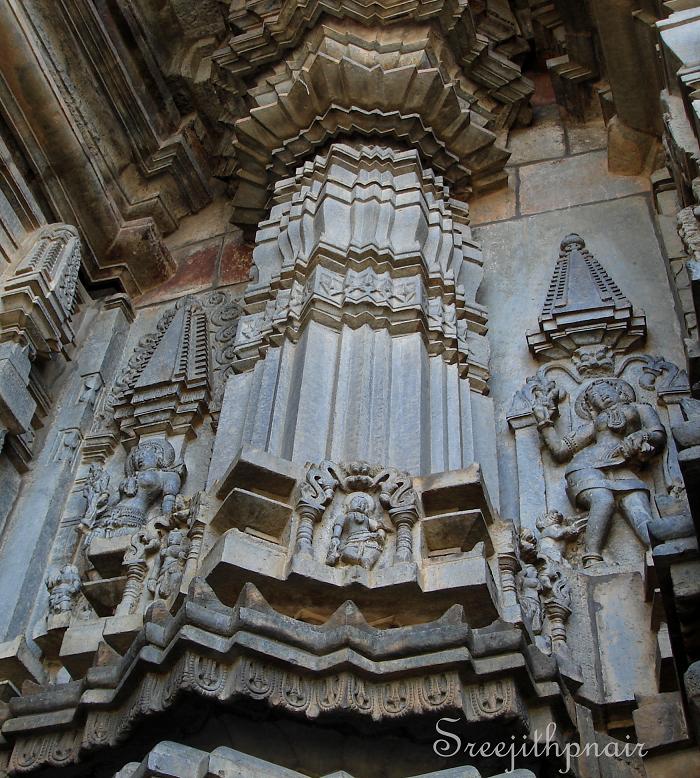 Half a day was too short to explore this incredible place. After “sort of covering” the temple we moved on.

How to reach Belur: There are frequent buses from Bangalore City bus stand (Majestic) to Hassan.

From Hassan, state transport buses ply frequently to Belur, Which is around 40 km away in Chickmagalur route.

The Chennakesava temple is just walkable from the bus stand.

Where to eat: Though it’s a small town, there are some decent restaurants in Belur where you get mostly vegetarian food.

Best time to Explore: The seasonal changes are not much felt in this part of the world, which makes Belur visit a comfortable one all year round.

Accommodation in Belur: There are some basic accomodation available in the Belur town itself. But, a google search listed Mayura hotel with some really nice reviews(I haven’t tried this place personally).

It was already evening by the time we reached Halebidu and the first impression was, OMG we need days to explore this temple complex.

Even though we got a great introduction to the stunning Hoysala architecture in Belur, we weren’t really ready for the magic of the Hoysaleswara temple of Halebidu. The beauty and perfection of the intricately carved sculptures here is at a different level. 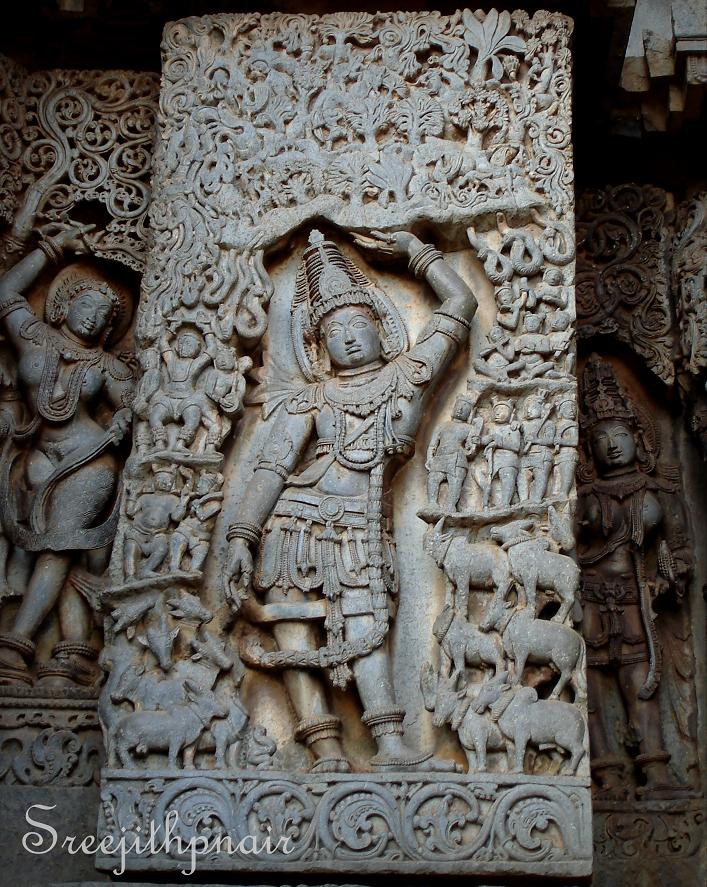 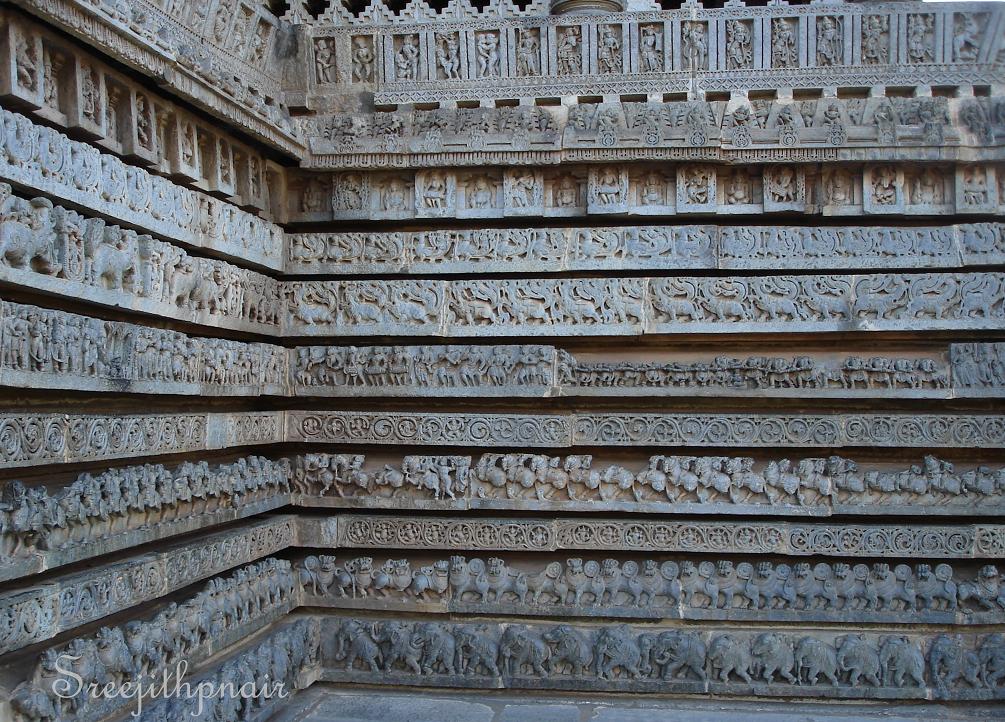 Halebidu was once the capital of Hoysala empire and attacked many a times by the armies of Delhi Sultanate.

Because of these waves of attacks, even after 86 years of work, the temple could never get completed.

The signs of which is very evident in some of the sculptures and pillars here. 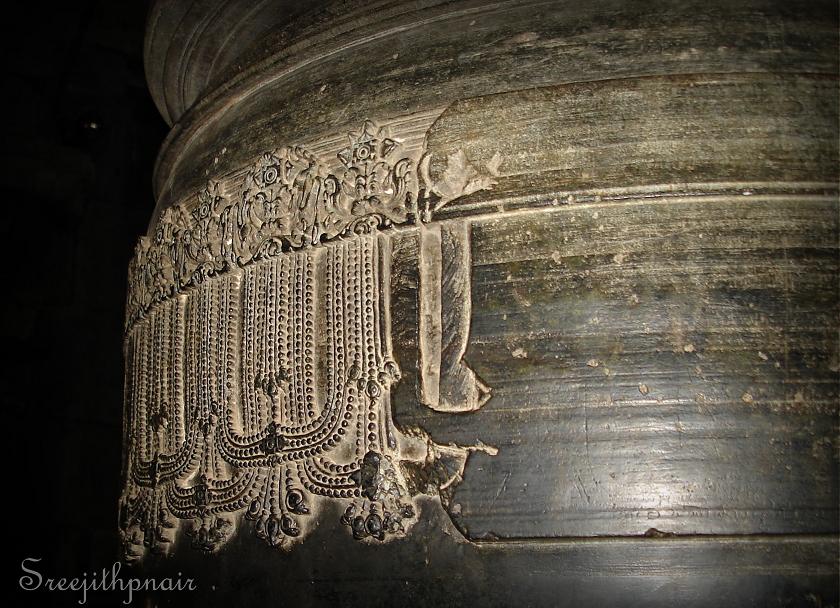 As it was getting dark, and we had to explore the Kedareshwara temple and the Jain Basadi nearby, we left the temple half-heartedly. Before leaving, I tried to capture a few more images and I was really lucky. 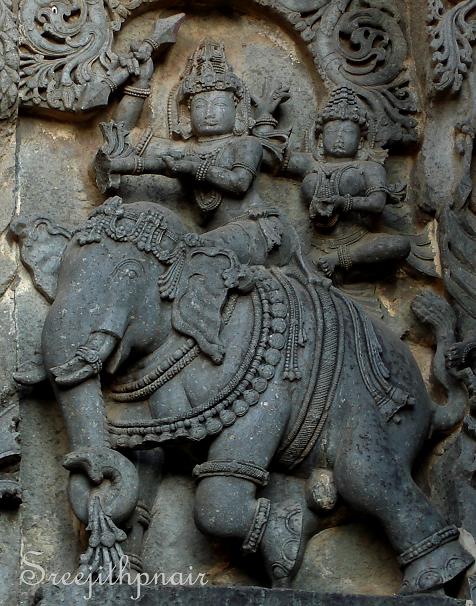 Though relatively small in structure, the stone work at Kedareshwara temple is at the same level as the two temples we had already explored. 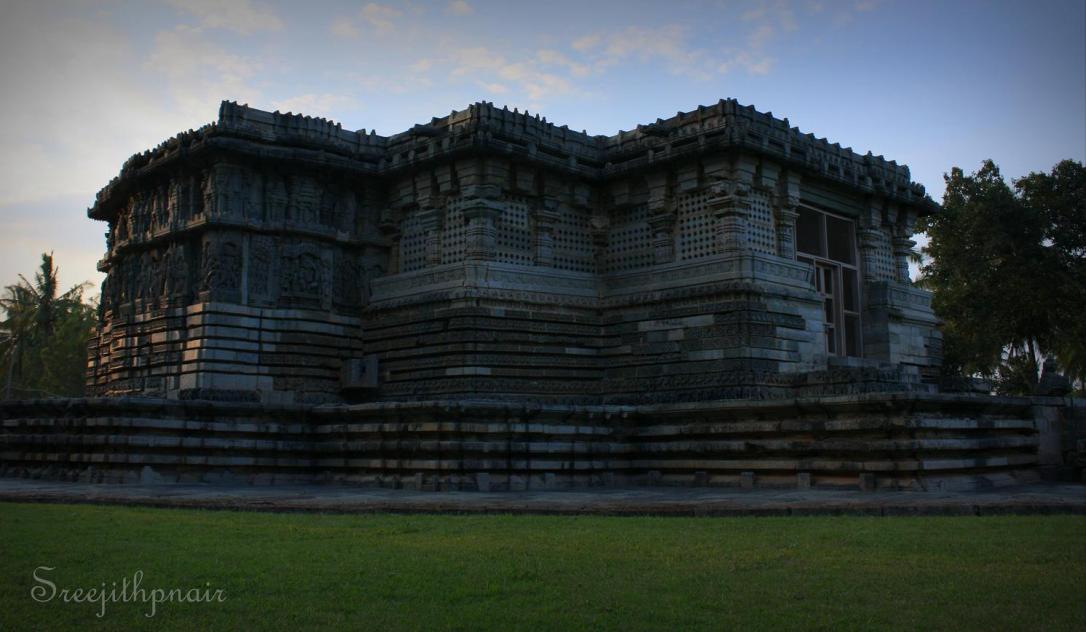 For a change, there was one more structure A Jain Basadi with a different style of architecture.

These two temples are less known and not many people visit here though it’s directly behind the main temple complex, but really worth exploring. 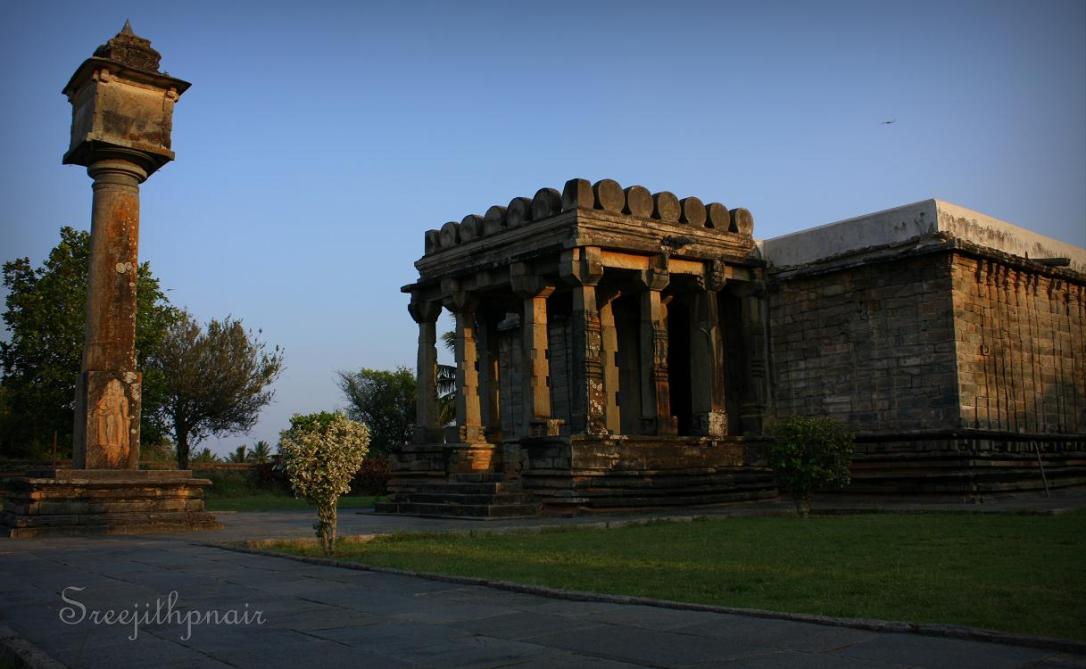 How to Reach: Halebidu can be reached from Belur(17 km) or directly from Hassan(33km)

Accomodation In Halebidu: Again, I don’t have any personal suggestions here but heard highly about KSTDC Mayura Shantala

Where to Eat: Halebidu doesn’t have many an options as far as eateries are concerned.

Foot Note: Even though you can explore these two amazing places as a day trip from Bangalore, that would be quite tiring. Hassan is quite a big town and has got many options for accommodation, so plan for at least two days and appreciate these epics carved out of stone.

She was a bit surprised at first and in a few moments she was on cloud nine.

I am sure most of us would have had this dream of playing with a butterfly when we were kids.

Let me share a Dreamy image for this week’s challenge 🙂 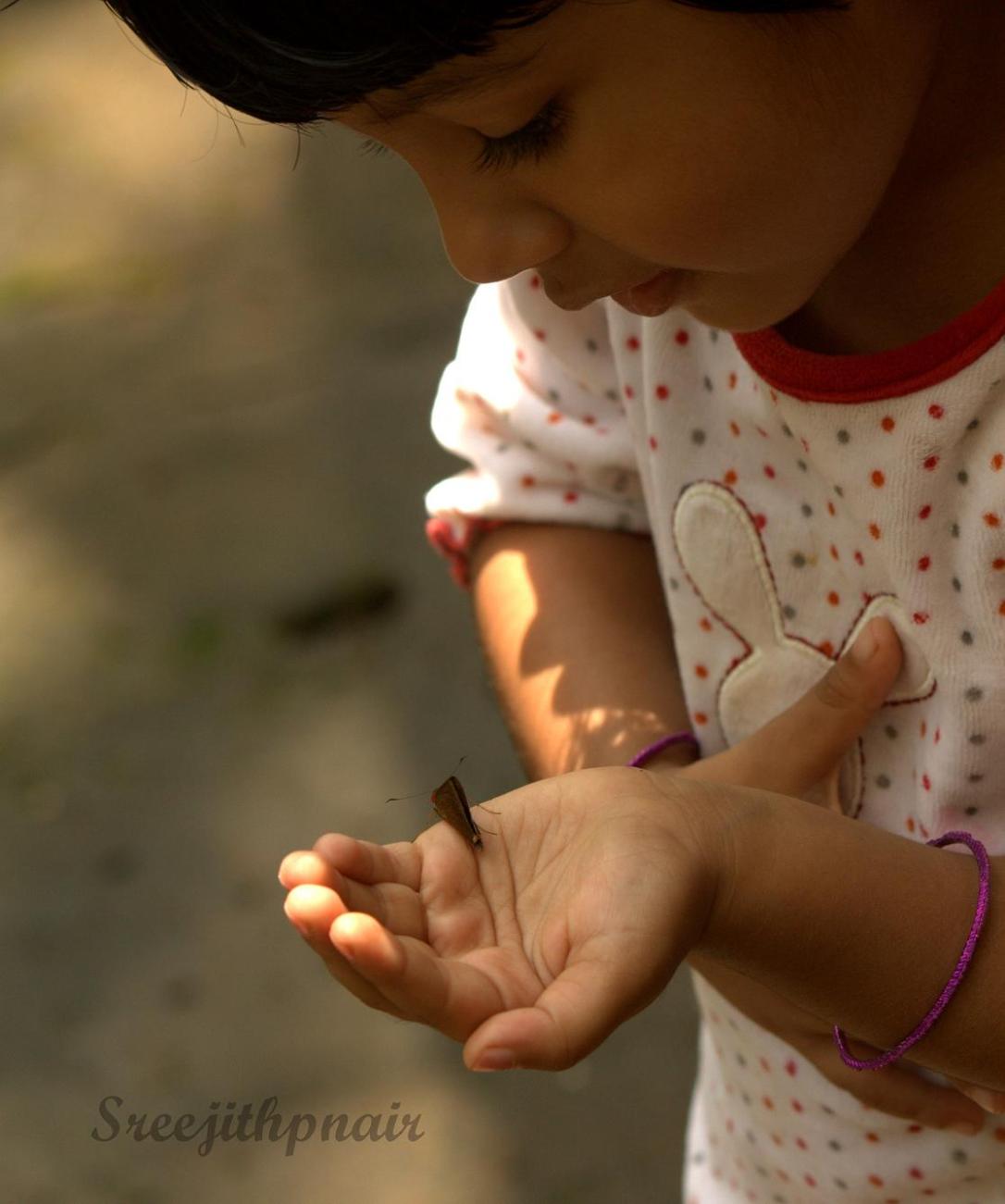 Philosophy is all about being curious, asking basic questions. And it can be fun!

Travel & Lifestyle - Come and Disover the WORLD with me!

A Philosophical Rejection of The Big Bang Theory

this blog has moved to https://conceptsportal.com

Journey of A Thousand Words

...from home to home

when literature and travel meet at the cul-de-sac

A Blog about magic, fiction and art

THIS SITE IS ABOUT ME, MY CREATIVITY, MY IMAGINATION AND MY FEELINGS.

Inspiring you to explore your creativity and get down to work! A great collection of Free Polymer Clay tutorials

Just a girl finding the world through her words.

My experiences in Italy and the world